Having the European Parliament commuting every month between Brussels and Strasbourg is ridiculous and costly. oneseat.eu is an initiative to end this disgraceful nonsense. Take a look and see if you agree.
others on eu strasbourg slöseri oneseat
by stromsjo No comments:

To be honest, there is one significant difference between 1976 and 2006. The chemistry between the four center-right party leaders of today’s Alliance appears to be very good which is a stark contrast from 1976 when journalists even failed to bring the three leaders to a joint photo opportunity.

Imagine that: ”we won’t appear in the same picture but vote for us and we’ll run the country in close cooperation”. Yeah right.

Well, things have improved. Hägglund, Olofsson, Leijonborg and Reinfeldt appear to get along well and they’ll be needing that in the years to come. So it’s not entirely like 1976. But as far as politics and courage is concerned Reinfeldt still has a lot of convincing to do.

others on val2006 mod reinfeldt
by stromsjo No comments:

I can’t help but wonder.

1976 was the first time in post-war history when the Social Democrats were defeated in a national Swedish election. The center-right governments that followed managed to keep Olof Palme in opposition for six years. But they failed in many other respects. Yes, they did prove that the nation could indeed be ruled by someone else which actually was far from certain in the minds of many. But the coalitions fell apart and Sweden saw no less than four non-socialist governments during this period. Most notably the center-right parties failed to set a new course. True, they did inherit a collapsing economy but they in essence delivered more of the same big government, big spending politics of Palme.

In 1991 the center-right regained power. With an economy in turmoil and without a majority in the Riksdag they still had the clout to set a new course and give Sweden the new start they had promised. The voters punished them for economic hardships and the Bildt government was defeated in the next election but they did make a difference and today’s booming economy is a visible result.

Now, 2006. The center-right has a substantial chance of regaining power in the September 17 election. They could form a majority government and maybe, just maybe, they could be looking at a sound economy for the coming years. How would they use this opportunity? Which road would Fredrik Reinfeldt take? Has he got the courage to challenge the labor unions and big government? Or is it 1976 all over again, new faces and no vision? I wonder.

others on val2006 bildt mod reinfeldt
by stromsjo No comments:

At the moment, the opinion polls are giving the ruling Social Democrats 34-35% support. When they lost power in 1976 they achieved 42,7% and when they lost in 1991 they achieved 37,7% - so obviously, they are in a rather difficult situation.

As they had 39,9% in the 2002 election, it looks very likely indeed that Prime Minister Göran Persson will finish his political career with a rather substantial defeat for the party.

others on persson val2006 historia
by stromsjo No comments:

Sweden is recognized internationally as a responsible partner. We’re at least on speaking terms with most countries. This hasn't always been the case.

Someone might argue that we’ve become boring. To some extent this is true and some are clearly unhappy. Gone are the heydays of Olof Palme who rarely missed an opportunity to flirt publicly with communists on various continents while at the same time pursuing a policy of secret partnership with NATO in defense matters. If that isn’t hypocrisy I don’t know what is.

Now Swedish-US relations are splendid and cooperation within The Union grows smoother every year with the Swedish Presidency in 2001 generally viewed as a success. Again, this is not exclusively due to the statesmanship of Göran Persson but a lot of progress has occurred on his watch and he has no doubt helped move Sweden from the fringes to a center position.

others on persson top10persson politik sverige
by stromsjo No comments:

Wow, that’s great news! Sure is. Unfortunately, it’s not about Sweden. Remember this? We're talking about the UK. Incidentally they started DAB broadcasting at the same time, in 1995. What a difference a government makes.

others on radio dab media politik

SLAY Radio is an internet-based radio station, transmitting from Gothenburg (Göteborg) in Sweden and relaying to several other relays. Being a Swede who insists on writing in English now and then, I might as well provide a link to this tongue-in-cheek crash course in Swedish. You probably won’t learn a lot though.

Just listen here or (if you're a serious student) start reading at the beginning.

others on: språk kurs svenska swedish
by stromsjo No comments: 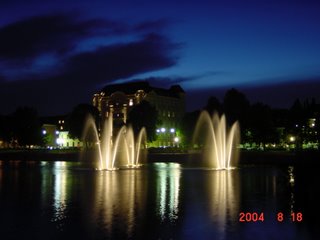 Funny really. After a long winter you'd think you could never appreciate darkness.
Come August and you're fed up with endless daylight.
There's a season for every taste. Go see.
Pinged to intressant.se
Other blogs on: augusti
by stromsjo No comments: