So it’s a trend. Last month, when I bought my hybrid, was the best ever for eco-friendly cars in Sweden. This according to recent stats quoted in The Local.

Still, nine out of ten cars sold are old-fashioned petrol gobblers. Makes me wonder.
by stromsjo No comments: 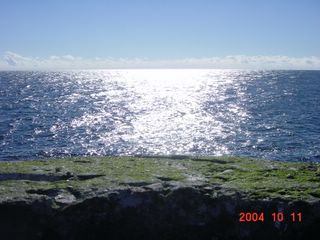 View of Öresund from Smygehamn

Windy but lovely. The local fast-herring establishment was closed for this October Monday but the southern tip of Sweden provided a sunny view of Öresund. Go see.
by stromsjo No comments:

Hagsätra: A view to a wall 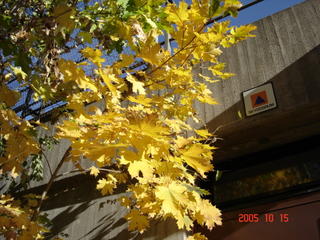 What a lovely season this is!

Find a concrete wall in Hagsätra (of all places) and there's all the scenery you could ask for...
by stromsjo No comments:

The Swedish Minister for Foreign Affairs informs us that she’s pleased with the referendum being held in Iraq.

Mrs Freivalds adds that “it’s important that the international community continue to support the interim Iraqi government”. Wisely spoken. So how does Sweden intend to help? Could we at least reopen our embassy?
by stromsjo No comments:

Time to wake up

The opposition maintains a lead but most of it started melting away when Prime Minister Persson decided to flex his campaign muscles in Björkvik.

If there’s anyone left who still believes the Alliance will have a smooth sail to victory it’s time to wake up. Well, there is one. I’d remain cautious.
by stromsjo No comments:

Death and Purity in Bali

Christopher Hitchens has a good column in Slate about how we keep failing in trying to project political reasons behind terror.
by stromsjo No comments:

I got myself a car the other day. A major decision for anyone. A milestone for me. Well, you might remember the background. It took a while do decide. I rented. I test-drove. I contemplated. At the end I stuck to my first instinct and got myself a hybrid.

Toyota Prius was introduced in 1997 and was first criticized for being uncomfortable. So it was redesigned and launched on a broader scale last year. This time the journalists were enthusiastic and we had a new Car of the Year. This helped convince me.

When I started looking in July 2005 there was hardly a day without headlines about skyrocketing oil prices. The prospect of future gas shortage loomed once again in peoples’ minds. This didn’t exactly make my decision more difficult.

The scientists are approaching a consensus now that CO2 emissions are among the worst foreseeable environmental problems in the coming decades. We’re all accountable for the choices we make. Those of us who can afford a new and more eco-friendly vehicle can no longer flee our responsibility. My decision was made.

I got myself a Prius.

I’m not the only one choosing a hybrid these days. According to some analysts we’re seeing the beginning of a major shake-up in the auto market. Let’s hope so. We can no longer go back to the future of excessively wild petroleum consumption. Those days are ending.
by stromsjo 2 comments:

The collective agreement is a lovely invention, probably the best since sliced bread. This claim is constantly repeated by trade union representatives as well as ministers.

There is no end to the blessings that come with collective agreements. They make the worker strong, proud and safe and they’re a symbol of a climate where enlightened employers gladly pay anything to get the job done exclusively by Swedish workers. The best is good enough and a merry future awaits us all. Can you hear the violins?

Incidentally collective agreements also help solidify the unique power of the trade unions. It’s quite simple really. The persons negotiating for millions of members are trusted with a lot of power and they won’t give it up. In fact, they’re actively consolidating their power base by sponsoring the Social Democrats who in return provide favorable legislation whenever requested. I scratch your back and so on.

The most astounding aspect of collective agreements is that they’re so flexible. Not only do they constitute a backbone in society. They can also – get this! – easily be broken whenever the union folks feel like doing so. A wildcat strike makes life more fun and if you'd expect an iota of critique from the very same persons constantly promoting the value of collective agreements you’d be dead wrong. A minister wouldn’t bite the hand which feeds him.

This unhealthy power concentration has prevailed for decades, it’s nothing new. Apparently, we’re not able to rid ourselves of this. If a non-socialist government would appear it can look forward to nothing but hostility from the unions. But there is hope on the horizon. The EU is examining the techniques Sweden uses to exclude foreigners from our labor market.

Meanwhile, don’t mess with Facket.
by stromsjo No comments:

Mona Sahlin, Minister for Sustainable Development, has announced an initiative to reduce our dependency on imported oil. Target year is 2020 when we’re supposed to have a society where these is always a better alternative to oil for heating and transportation as well as our industry.

Some will dismiss this as politics as usual. So it is, of course. Any seemingly courageous initiative less than twelve months before an election which just happens to coincide with the current debate (in this case about petroleum prices) should be met with a bit of caution. This is particularly true for a ministry which has specialized in words rather than action and for a government which is pressed by lousy poll figures.

Nevertheless, Sahlin’s initiative is bold and mostly constructive. Sustainable development is a necessity and a question far more important than the never-ending whining about the price of petrol.

Unfortunately, the ministry hasn’t been able to come up with a consistent policy. Specifically, any attempt to reduce oil dependency and CO2 emissions should embrace nuclear power rather than dismantling it. Sahlin knows this and therefore she doesn’t mention nuclear power at all in her lengthy article. Sweden has deliberately given up a position of world leader in this field. In the wake of Kyoto there are immense possibilities for those able and willing to export civilian nuclear technology.

At the end of the day, sustainable development – like many other areas – requires a new and different government. Let us replace Sahlin, embrace nuclear power and go forward with the goal of eliminating oil dependency by 2020.
by stromsjo 14 comments: