on frogs and trust

It's been said that a frog placed in cold water that is slowly heated will not perceive the danger and will thus be cooked to death. Be that as it may, gradual changes are interesting and important. One such gradual change is the deteriorating social climate in our societies. We don't trust our neighbor anymore and - surprise! - he doesn't trust us either. This change has taken place within a few decades.

Not so long ago people hardly locked their doors. If they did the lock was primitive by today's standards and sometimes the key was put under the door mat. Today we get ourselves security doors and all sorts of locks and alarms. Why the sudden need for all these protective measures?

When I was a kid growing up in a suburb we used to walk to and from school. My Mom accompanied me for a week or two when I began school at age six - that was it. Nowadays a growing number of kids are being driven to and from school and my guess is that they are no more handicapped than we were. As long as the school is nearby, they could easily walk too but their parents don't want them to. Why is this? What are we trying to protect them from?

There's a well-known photo from Geneva in 1955 where a friendly-looking policeman is "guarding" a summit between U.S. President Eisenhower and the Soviet leader Khrushchev. I suppose he had a couple of colleagues back at the station as well. Just how many policemen are needed today to protect any EU summit?

I'd say there's a trend emerging here and it's not a pretty one.

Maybe the frog would in fact jump out of the kettle. But what about us? Why don't I hear any debate at all about these changes which have taken place during the course of a couple of generations?
by stromsjo

Email ThisBlogThis!Share to TwitterShare to FacebookShare to Pinterest
Labels: risk

You know, I wish it was that simple. That it was just a matter of cowardliness and unnecessary distrust. But it's a harsher world out there these days. I would love to let my kids walk back-n-forth to school when they get older, but no way. I'll walk with them. Until they're 18, at least. The news have far too often shown examples of parents who wished they had, just that once, that once that really mattered.

I WISH I lived in the society you're describing/arguing for - but I'm not going to have it proved to me the hard way that I don't. The stakes are just too high.

...and if I had kids I would probably be doing the same thing.

There are (at least) three questions here:

1. Is it true that a major change in societal trust has taken place over a course of a generation or two? I say "yes" and I take your answer as a "yes" too.

3. What can we do? Do we have to accept remaining in the kettle as the water gets hotter?

I do not claim to have a simple answer to the third question but I think we'd have to look for a common view on ethics.

I think you're missing the most important question:
2b) Is there reasonable grounds for this or not?

I'd say there's where "pudelns kärna" lies - because yes, there are reasons for this. As I said - we live in a much more harsh society now, than ever before. That is, at least, my opinion. What I will give you is that the degree of harshening of our society is probably not entirey in line with the psychological "fear factor" that has given us an 11th command: Thou shalt not trust thy neighbour. Meaning - I think we're more afraid than we have to, but there are still reasons to watch your back out there.

Crime and violence may happen only to a small percentage of the people, but the ppl it does happen to, get a 100% worth of it.

Someone might argue that we're so well off these days that there are lots of valuable items in an average home and hence the increased need for locks and alarms. Mayhaps. Still won't explain the need for thousands of policemen at major events.

I think we're using different words for more or less the same phenomenon. Yes, the climate is a lot harsher and yes, there is a reason. What I'm suggesting is just that there's a continued cause-and-effect here where the lack of trust helps foster exactly the climate we're afraid of. And in that respect, we're all part of the problem.

Much like the classic arms race (yes, I know it's a bad analogy but bear with me) where everyone agrees that a world without weapons would be nifty but no one wants be first giving up his. I guess we'd all want to live in a society where doors aren't locked anymore but no one wants to go first.

What's your idea about the reason(s) for this deteriorating social climate? It's happening throughout western countries and has been going on for decades so we can probably rule out the simplest theories - like "this is all the fault of party X or Y who won the most recent election".

I agree that it's a vicious circle, and as always - which does come first? The hen? The egg? I haven't been ignoring you since yesterday, I've actually been thinking about this, but I haven't come up with a good answer. I don't really know how this happened. But I have thought many times, in many different issues, that fear is the biggest threat to mankind and her societies. Because fear makes us shoot first and ask questions later.

But we're not all doomed yet. I mean - a year and a half ago you and I didn't know each other, and here we are, debating everyting from current society to photography and... well, a wide range of cultural matters. ;o) This is not me saying social media is the solution to everything, I don't believe it's that simple. But I do see this as an opportunity to widen our perspectives. If we choose to take the opportunity, that is. Today - some of us do, some of us don't. Next generation...? My guess is more of them will than won't. And with a little luck - it might count for something.

But then there's a heap of complex issues concerning social integration, and I'm not talking just migration-wise, I mean the whole we/them-culture we're making. We need to include more ppl in the "we", and less in the "they" categories. THAT, if anything, should do the trick.

Good to have a bit of semi-philosophic pondering on this issue. Us vacation'ers should stick together! ;)

Being able to debate a wide range of cultural matters with new acquaintances through various social media is great. Some people are already taking the opportunities of those 2.0 tools and get interconnected without the slightest respect for geographical or other social distances. That's just fine and probably an important part of the social puzzle.

I do believe however that, as always, there are the have's and the have-not's. Most of us don't ever read blogs or tweets so it's a bit early to judge to what extent our existence is being reshaped.

The good news is that there's still a lot of trust out there.

The bad news is that I - for one - get surprised when I encounter it. I spent an hour this afternoon in an almost empty restaurant. All lunch guests had left and gone out into the sun. The table next to mine was not quite empty though. There lay a laptop computer and an iPhone. After some ten minutes the owner showed up from whatever he had been up to, smiled at me, sat down and continued surfing and calling people. Sure, this wasn't Stockholm but still an impressive display of trust. I hope life won't make him regret his attitude and instead allow him to become a good example.

We do need those good examples. 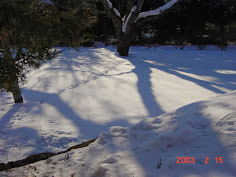