Seven gold medals in Torino. Those of us, including yours truly, who argue that Sweden could do better certainly didn’t find any new arguments at the Winter Olympics. I wonder how long it’s going to take before PM Persson claims part of the victory...
by stromsjo No comments:

Well, they actually said so.

I happened to take an airplane the other day. It’s not exactly an every-year experience but it does happen. Last time was in 2003. Before that, uhm… 1992.

I suppose it’s some kind of irony. Does anyone actually enjoy a flight?

Even if you’re totally uninterested in the environmental pollution and fuel gobbling, even if you’re not among those who are scared of taking off on wings of steel and even if you’re not in pain while landing (like most kids, some adults and me)… would anyone really enjoy sitting crammed between strangers in the most claustrophobic fashion?

I wouldn’t think so.

Flying is fast, surprisingly cheap and sometimes necessary. But it’s not enjoyable.
by stromsjo No comments:

The whining about Göran Persson and his dining continues. Apparently the Prime Minister occasionally has a good meal in a better restaurant together with close aides. Why is this a problem? Is there any other country on the globe where a head of government is not trusted to make these kinds of decisions? The newspapers have dug up a receipt indicating that one of these parties contained Diet Coke as well as Espresso. Stunning luxury indeed.

His government spends billions of crowns on the most questionable ventures. Could our beloved journalists kindly focus their attention in that direction instead? I’ve had enough of this kind of nonsense journalism. Would our media be happy if Foreign Secretary Freivalds brings her own lunch box to the next government conference?
by stromsjo No comments:

The debate on oil dependency and the Sahlin initiative continues months after my initial post.
by stromsjo No comments:

I suppose the main reason for my per sistence :) is the fact that I had a slightly more realistic approach than some fellow bloggers. I certainly didn’t expect a rise to fame but I enjoy expressing myself in all sorts of formats and the web log is a convenient way of sharing a thought or maybe a picture. And I never accepted the idea that a blogger has to publish things on a daily basis whether she has anything to say or not. In my world, it’s better to wait until I’ve got something on my mind.

My thanks to those who haven’t given up on reading and a special thanks to those who commented. There haven’t been many comments. Unfortunately Blogger does not provide the reader with any hint about where in a blog some recent comment has appeared. So when there actually is a bit of dialogue a while after the initial post, like on the Sahlin topic (thanks Dave!) most readers will miss it unless I re-post or advertise in some other fashion.

Anyway, welcome to a second year of per spective.
by stromsjo No comments: 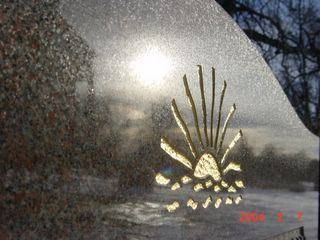 Frösön and particularly Frösö Kyrka is a lovely place. Magnificent surroundings, rich with history and culture. This February morning marked my first visit in 2004 and I would keep on returning there whenever I could during that remarkable year. Go see.
by stromsjo No comments: