This web log has been registered in Stockholm at the blog map bloggkartan.se.
by stromsjo No comments:

"no Motherland without you"

Take a look at these images. It's not Germany in the 1930's. It's 2006 and they're supposed to be equipped with nukes already. If this isn't spooky I don't know what is.
by stromsjo No comments:

living with your neighbor

Israel has every right to defend its people and its borders from aggression. If the Palestinian Authority and the Lebanese Government are unwilling or unable (or both) to control their own territories Israel will have to do it for them.

Warfare is ugly business, civilians can and will come in harm’s way. This is especially true when the hostile militants such as Hamas and Hezbollah deliberately establish bases in residential areas. Israel must take every precaution possible to minimize collateral damage. Choosing to target government facilities in Gaza at night when they’re empty is an indication of how Israel tries to avoid casualties.

The current exchange of hostilities, regrettable as it is, is not yet a full scale war. Israel retains the capacity to flatten Gaza and Lebanon entirely and the militants currently testing Israel’s patience would be the first to notice if and when Israel decides to abandon its policy of restraint.

Still, you might not love your neighbor but you have to live with him. From that perspective this is a conflict without winners.
by stromsjo No comments:

The era of Göran Persson will be remembered as an era when public spending was brought under control.

Life used to be easy for the Social Democrats and in particular their finance ministers. Few if any Swedish politicians in recent years have been more overrated than Gunnar Sträng (Minister for Finance 1955-1976) who presided over a booming post-war economy and had but one solution to any budget challenge: raise taxes, always raise the taxes.

When Persson took control of the finances, much of the renovating groundwork and many painful decisions were already taken care of by the Bildt government. But interest rates had skyrocketed, the markets were suspicious about our fiscal discipline and raising taxes was generally not an option any longer in the global era of open, competing economies.

Throughout his years in government Göran Persson has maintained a procedure where the parliament stipulates in advance a ceiling on government expenditure. The discipline has been far from perfect. Instead of further cuts in spending the government has tried, year by year, to balance the budget through one-time efforts like selling state-owned companies or sometimes postponing expenditures from December to January. We haven’t reduced the foreign debt the way we should and we’re not prepared for the looming crisis where fewer Swedes in active years will have to take care of a growing number of elderly.

Still, interest rates bear witness to the fact that the markets have recognized the fiscal responsibility of the twelve-year Persson regime.

Here we go. Ten people in or near the Social Democratic leadership have been wining and dining for just over 3000 Euro. Lots of noise and turmoil, as could be predicted. And I can’t help but ask: why are we unable to debate how mismanagement of Stockholm and Sweden costs billions of Euro and at the same time so fascinated by details? A boat trip and a good dinner for 3000 Euro. Would that make headlines anywhere else in Europe?
by stromsjo No comments:

One of Göran Persson’s major contributions is actually what he did not do. Here are some topics of heated debate during the nineties...

The first day of sickness is a qualifying day ("karensdag"). The new pension system involves a modest portion ”premiepension” which is actually managed by the individual. Tax funding for schools is extended to scores of private schools. Various markets are deregulated.

These are all examples of what the right-wing Bildt government managed to introduce during its brief three year term while simultaneously facing a collapsing state economy and a major crisis in the financial sector.

The Social Democrats regained power in 1994 after three years of relentless criticism of the new course. Persson became finance minister and in 1996 prime minister. And what did he do about all of this? Basically nothing. Sweden in many respects stays the course of Bildt and Persson is harvesting the fruits. 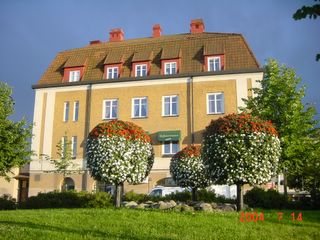 Parting shot before boarding X2000 again after a summer evening in Katrineholm. As a matter of fact, it did rain first but just for a while. I was lucky as always in 2004. Go see.
by stromsjo No comments: