I’ve had a strange feeling throughout this election campaign and after the Alliance victory. They won, they really won. It was hardly a landslide, 48-46, still they did win. But the price was high. In order to win PM-to-be Reinfeldt abandoned central parts of his party’s policies.

What exactly is a conservative party with a brand-new agenda? Has anyone seen such a thing? Sounds like a contradiction in terms to me.

Don’t get me wrong. Ousting Persson was a necessity before Sweden became a one-party-state. I’m glad the Social Democrats were defeated. But the new majority didn’t offer a shift from the leftist agenda; they merely adopted parts of it. So how can they set a new course without a clear mandate? Time will tell.

Meanwhile, what happens with the conservative electorate Reinfeldt left behind in the process? Those of us who think that big government, monopolistic trade unions and excessive taxation are key problems in Sweden, how should we vote in 2010?
others on val 2006 reinfeldt systemskifte socialdemokraterna
by stromsjo No comments:

patriots of the world

This general election established the migration-skeptic party Sverigedemokraterna as the major national contestant still outside our Riksdag. They claim to be the largest national movement in Sweden; many view them as nothing more than xenophobes-dressed-up. The party keeps growing and got almost 3% of the national vote this time which would have been more than enough to secure seats in the Riksdag if it hadn’t been for the 4% limit.

Sweden has been affected by globalization and migration over the recent decades and some of us will always be afraid of the unknown, different languages and cultures. In a fully functional society where there is a job market even for those who cannot speak the local language fluently newcomers can quickly get started making a living on their own. Not so in Sweden where new citizens often become isolated and passive receivers of state welfare support on a long-term or even permanent basis.

With our ailing integration policy Sverigedemokraterna can count on further growth and they may well enter our Riksdag in 2010 so the prospect is not entirely pleasant. Still, there’s no need for panic. If and when more than 4% of Swedes were to share their views they should be represented in the Riksdag and these issues need an open debate. Besides, we’ve had communists in our parliament for decades and our schools don’t seem to prioritize teaching history so what else could be expected?
others on sverigedemokraterna val 2006 integration politik
by stromsjo No comments:

a new center of the Solar System

For centuries there was widespread disagreement on whether the rest of the universe revolved around the Earth. I used to think that the heliocentric perspective was sort of established. Well, apparently I missed the Swedish Social Democratic party where many seem to believe that the party headquarter at 68 Sveavägen, Stockholm is the true center of gravity.

The party is looking for a new leader and many are calling for EU Commissioner Margot Wallström expecting her to leave her mission in Brussels and come home to take the lead after Göran Persson. Wallström would certainly be a good candidate for many positions but – excuse me for suggesting this – her current job is vastly more important for the people of Europe than becoming a party chair in Stockholm. I’m amazed that so many people fail to realize what a vital position Wallström holds, being number two in the Commission. She’s doing a great job and would be ill advised to terminate prematurely what she calls her mission irresistible.
others on val 2006 wallström socialdemokraterna eu
by stromsjo No comments:

Back in town again after spending a couple of weeks driving between Höga Kusten, Jämtland and Dalarna I return to a different political landscape. It’s a relief to find our government being ousted. Now it’s make-or-break for the opposition Alliance. For once they actually might have some time in power without having to fight an immediate crisis. And this is the first time they enjoy the opportunity of having four years (rather than three) until the next election. So they’d better deliver. This is their chance.
by stromsjo No comments:

As a diversion from yesterday’s televised interview with opposition leader Reinfeldt the governing Social Democrats conveniently launched a big hoopla about alleged intrusions into their computer network. A police investigation will start and, again conveniently, this probably won’t come up with any conclusions before Election Day. Good timing.

Obviously, if the investigation would reveal intrusions that would be just as unacceptable as other irregularities during this campaign. They all contribute to undermining our democracy.

The opposition party Folkpartiet is supposed to have directed their campaign using key information from their opponents. One example would be that on August 3 the opposition leaders proclaimed that they would make a joint bus tour at the same day when Prime Minister Persson had announced his own bus tour. How extraordinary! Who has ever heard about politicians traveling before an election? Obviously, this must be a major conspiracy...

One commentator makes confused comparisons with Watergate. Well, for the record, Watergate was about a third-rate burglary and wouldn’t have been remembered at all unless it had been followed by a major cover-up. I wouldn’t compare that with today’s embarrassment and excuses.

One final point from a slightly different perspective. If people in the inner circle of the Social Democratic party are given access to sensitive information it might be a good idea for them to keep it to themselves. Any citizen today is supposed to be able to protect pin codes and similar personal secrets. If you do change your password once in a while you wouldn’t have to shout about someone misusing it for half a year or more.
others on intrång socialdemokraterna password val 2006
by stromsjo No comments: 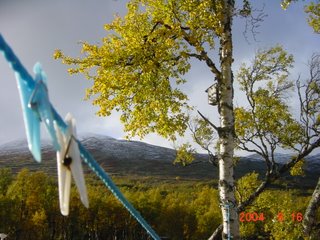 I can't help it, this remains my favorite month.
And where could there be a better place to enjoy it?
Storulvån is a pearl and the final weeks of the season offer delightful relaxation.
others on september go see storulvån turism
by stromsjo No comments: