I managed 2000 meters in 72’54” recently, a new personal best on this particular distance. Good average speed but I should be able to do better. Maybe next week?
by stromsjo No comments:

No gas, no direction

Sweden continues through a phase of jobless growth. Any quarter now things will begin to look brighter! So we’ve been told for years. The phenomenon is not unique to Sweden but our dysfunctional labor market makes matters worse.

Time is running out for the government so they’ve announced a big scheme to create jobs in the public sector. This is yet another temporary effort designed to fix permanent structural faults. It has nothing to do with the creation of real jobs. It has everything to do with an upcoming election. PM Persson intends to bring down the unemployment figures, no matter how. With no idea about how to solve the real problem he wants to appear energetic and committed. With an oversized public sector and extreme levels of taxation he intends to spend even more tax money on temporarily expanding the public sector. His concept is embarrassing at best.

No gas, no direction. Power without vision. The Labor party has reached the end of the road. Sweden needs a change.
by stromsjo No comments:

Global warming must be taken seriously. We cannot predict the future with certainty but there is plenty of evidence on the table that something's going on and the principle of caution requires careful handling of this little planet. It’s the only one we’ve got.

The UNFCCC-initiated Kyoto Protocol was an attempt at reducing emissions of greenhouse gases. The good thing about Kyoto was that it took place at all, increasing global awareness. But Kyoto came too late, provided too little and was a misguided effort. The protocol fails to require action from the most rapidly growing economies, like India and China.

The American criticism of Kyoto has been substantially correct but still the Bush administration hasn’t been entirely credible on this issue. Specifically: disputing global warming is certainly a reasonable position. The scientists are far from certain about cause and effect and how to interpret our changing environment. Still, claiming that global warming might be a problem but we won’t do anything as long as others don’t do their part was an awkward standpoint for a global leader.

Now, at long last, some constructive action on the climate issue. America has taken the lead, much like we expect them to do on any issue. The six-nation initiative, announced in Vientianne, focuses on clean growth, developing new technologies as well as actively promoting good existing energy sources like civilian nuclear power. The kind we’re dismantling in Sweden, in case you forgot.
by stromsjo No comments:

Prime Minister Persson intends to build a house worth 2M Euro. Could this kind of “news” possibly lead to an inflamed debate in any other country? In our Land of Envy this causes all sorts of criticism. The great irony here is that his own Labor Party has thrived on exactly this kind of envy for decades. So the opposition could be forgiven for thinking that such a storm, in fact, serves him right.
by stromsjo No comments: 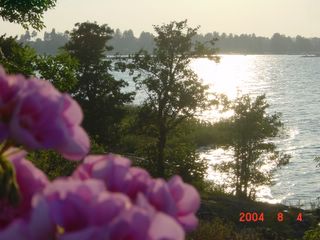 It was one of the warmest days of last summer and I celebrated my visit at Abborrberg by Bråviken outside Norrköping with a gigantic ice-cream. Go see.
by stromsjo No comments:

Updating the DAB story... I finally decided to face my responsibilities as a citizen of the digital age and get myself a digital radio.

When my TV broke down a couple of years ago I imagined I’d have that fixed in a jiffy. But I soon discovered how much time I “saved” by not watching (at best) semi-intelligent televised stuff and these days I have no intention of re-enabling television in my home. Not a chance.

Radio is different. Radio is for people with imagination. Radio is cultured. Radio can be enjoyed while watching the sunrise. Or while closing my eyes and relaxing. Or just about anything. Radio is a non-intrusive resource. And from now on, my radio is digital.

The sound is great, there is additional information (for example what song is playing now) in the display and I get six new non-FM-channels. Future receiver models will even provide pause or rewind if I have to take a phone call or need to go get a pen to write something down.

So I’ve done my part, I’ve joined the tiny DAB-population and now I expect our minister for culture to put together a comprehensive strategy incorporating commercial as well as public radio. Ten years of experimenting without listeners is quite enough.
by stromsjo No comments: