sad ending to May in Falsterbo

I celebrated the arrival of May by bringing back some memories from Falsterbo Strandbad. Before the month ended, this. A few hundred meters away, no more.
by stromsjo No comments:

The recent decades have made us aware that we cannot ignore our environment. Sustainable growth has to become a reality for mankind to survive and prosper. This won’t come about without pain so it will require bold leadership. We can argue about how to proceed and we can disagree on issues like nuclear power but I give Göran Persson credit for making the environment a top governmental priority and also for bringing the issues to Brussels through Swedish Environment Commissioner (now Commission Vice President) Wallström.

I aim to find ten positive things to say about the leadership of Göran Persson.

Sweden has had peace for centuries. Without trouble around our borders we could use our resources in conflicts abroad where international assistance is necessary. Sweden has a long tradition of supporting UN missions but under Göran Persson our forces are increasingly involved in multilateral efforts. This is a constructive engagement and our military badly need the exercise. It also helps integrate us into an international framework thus slowly preparing the ground for a joint European defense.

ten reasons to appreciate Göran Persson
9 ...
10 an international defence
by stromsjo No comments:

Find ten good things to say about your opponent!

Not trivial stuff like he’s got a nice shirt or supports the same football team. Politically relevant reasons to appreciate your opponent.

I’ve never voted for the Social Democrats and probably never will. So there’s my challenge and here I go. I made my top-ten list of positive things from a decade with Prime Minister Persson.

I’ll be disconnected from the blogosphere for a while and have therefore disabled commenting until I’m online again.
by stromsjo 1 comment:

US Presidents are rarely recruited from the Senate. Many senators have tried. Al Gore almost made it. But the dream is still alive with quite a few on Capitol Hill. Few believe that Hillary Clinton would be satisfied to top her career with a senatorship. Instead, speculations are increasingly focused around her and how she tries to reposition herself as a moderate just in time for the 2008 campaign.

My firm belief is that eight Clinton years are quite enough, thank you. But I can understand the tantalizing perspective of the Bush and Clinton families already maintaining control for two entire decades:

If Hillary Clinton is to be kept from the Oval Office, Republicans will need a game plan... Example: Hillary should not be permitted to keep silent on issues that may box her in. Her preferred tactic is to coast to the nomination without having to commit herself. Republicans should demand to hear her views on taxes, on the United Nations, on tort reform, on the Patriot Act, Iran's pursuit of nuclear weapons, in short, on every conceivable question that will bear on the 2008 race.

If senators rarely reach the Oval Office, governors frequently do.

crystal walls all over again

I’ve always been fascinated by the stories of Ray Bradbury. Not the televised stuff – we’re talking books of course.

In a novel from 1951 Bradbury challenges our perception of kids' playrooms. With the help of images projected on large screens their imagination is amplified to a point where things… well… start happening.

And now I read on Wired that large projected images can keep kids engaged.

"a useful bridge to even greener sources of energy"

An editorial in yesterday’s New York Times further underscores that the times are truly changing. Civilian nuclear power production – an industry which was almost brought to a standstill due to irrational fears and a nostalgic drive for a low-tech-society - is once again met with cautious interest:

There is good reason to give nuclear power a fresh look. It can diversify our sources of energy with a fuel - uranium - that is both abundant and inexpensive. More important, nuclear energy can replace fossil-fuel power plants for generating electricity, reducing the carbon dioxide emissions that contribute heavily to global warming.

Finland decided to revive its nuclear program a few years ago and is about to expand it further. How many years should Sweden waste before deciding to follow their example? Could we at least stop dismantling fully functional reactors and terminate the government of Göran Persson?
by stromsjo No comments:

back to the future in Ådalen

Ådalen in the middle of Sweden is a place of stunning beauty, negative growth and a bit of dark history.

The clash 75 years ago between striking workers and armed forces which cost the lives of five people is a shameful episode to be remembered. Still, we can be grateful to live in a country where this kind of oppression hasn’t occurred in almost a century and where the like is nowhere to be seen today.

The Social Democrats keep bringing up the events of Ådalen. Facing a new world with Latvian builders, a unified European defense structure and a looming showdown between freedom and oppression in the Muslim world looking back is natural for a party with no strategy for the present, much less the future. Still, if there are any intellectuals left in the party of Göran Persson they should be pretty embarrassed by now. Instead of offering a vision for the future, instead of showcasing their recent track record they insist on trying to invent an enemy who simply hasn’t been around for 75 years.
by stromsjo No comments:

Here are ten hints about my Inland Challenge.

Names like music to my ears... Now, what road could this be?
by stromsjo No comments:

Most of us are finally becoming aware of the urgent need to change our mode of transportation. Inefficient cars, propelled by fossil fuel and producing masses of CO2 are yesterday’s solution underscoring tomorrow’s climate urgency.

Autopia has a piece on the way forward.

According to the European Federation for Transport and Environment (as reported by EEMS), vehicles in the EU are supposed to reduce CO2 emissions to 140 g/km by 2008, but 2006 vehicles emit 160 g/km, down just one percent from the year before.

Link here.
by stromsjo No comments:

I just invented a new captivating travel project. If you know me you know it’s probably an entirely domestic tour and you’re so right. It's simply another part of my Swedish mega-excursion. I reckon it’d take three weeks and a considerable budget so it’ll have to wait for a while. We’re talking well over 4000 km of training behind the wheel on and around the Swedish version of Route 66. Identifying this particular road is left as an exercise for the reader!
by stromsjo No comments: 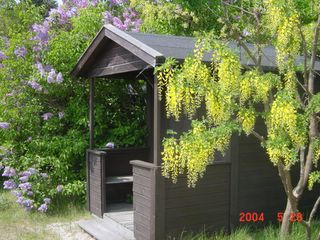 Spring doesn't seem to be in any hurry this year but some things are simply worth waiting for. Go see.
by stromsjo No comments: